On Tuesday, May 4, 2021, HRM approved the final budget for the 2021/22 fiscal year. This includes a lot of good things for our community.

I’m thrilled that HRM Council approved the $150,000 for the e,coli microbial analysis for First Lake. This will help us identify the source of the e.coli, and we can then move to correct the problem. This year we will also be testing for general lake health and we will be determining the e.coli count. These tests will be performed at the 5 areas in the lake in the diagram below.

I’m absolutely thrilled that we are moving forward with the lake testing. This lake is one of the gems of Lower Sackville. I would really like to see it restored to a healthy state where people can enjoy swimming off of Kinsmen Beach without any concern.

It will take time, but we are working very hard to get there.

The Planning & Development department, in HRM, is responsible for Lake Water Quality. On April 7, 2021, we went through the Planning & Development budget and business plan. You can see the meeting information here: https://www.halifax.ca/city-hall/regional-council/april-7-2021-special-budget-committee-meeting, including the report that shows their current finances.

At this meeting I brought forward the following motion, which was approved:

THAT Budget Committee request a briefing note detailing the measures and implications for including $150,000 in one-time funding for costs associated with a report on E.coli microbial analysis for First Lake within the proposed 2021/22 Planning and Development budget, to be considered in the parking lot as an operating over budget option.

So what does this mean?

We have two more budget meetings – April 21 and then May 4. On April 21 we will be discussing all of those things that we have moved in to the parking lot, and on May 4 we will approve the final budget. These are items that are in addition to the budget. We will be discussing these items one at a time and approving them or not. Hopefully this testing will be approved. If it isn’t then I’ve put it on the radar for everyone, and they know how significant it is, and that I’ll be asking for it to be done.

We know that there is a problem – a high e.coli count. Previous testing tells us that.

This test will tell us what and where the problem is.

Once we know what and where the problem is, we’ll better be able to move ahead with a solution for it.

I’ll continue to keep this post updated with further information.

In late 2020 I became an active member of the Friends of First Lake water stewardship committee. We will be doing regular testing of First Lake for both common nutrients and other regular information, and we will also be testing the e.coli count. I’ve committed to funding these tests for as long as I will be a Councillor.

This tells us that there is an e.coli problem, and will monitor the general health of the lake. 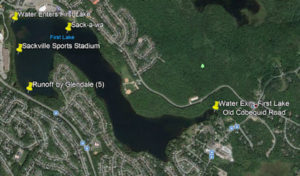 I talked briefly about the First Lake water quality in my e-newsletter of July 18, 2020. That article is here, and you can click on the image to see a more complete view of where I have asked the lake to be tested:

First Lake is one of the gems of Lower Sackville. Due to construction, and the unchecked silt flowing in to it 40 years ago, it had suffered greatly. It had been an aerial landmark because it was an orange lake.

Thanks to a lot of work by groups, like the Sackville Rivers Association and the Friends of First Lake, we have all been made more aware of the importance of the environment. The lake is in far better shape, and for quite some time we have now been enjoying the lake and the beach. Almost.

There has been an ongoing bacteria issue with the lake at Kinsmen Beach. This is what prompted the construction of the Kinsmen splash pad. The beach went from being a supervised and tested beach, to just being tested, and this year no testing was done. We are moving backwards, and I started addressing this as soon as I was elected.

I’ve been working with HRM staff to get First Lake tested in the areas that are pinpointed above. These locations are a) where the storm drains flow in by Glendale, b) by the Sackville Sports Stadium, c) by Kinsmen Beach, d) by the Sack-a-wa canoe club, and e) where the water exits the lake at Sucker Brook.

The past tests at the beach measured the bacteria levels. The tests that I’ve been asking for also identify the biological markers (human, waterfowl, pet, or deer) and mineral markers (predominantly phosphate) so that we can better identify what the source of the problem is, and then work to fix it.

We should be seeing more about this in the next few months. 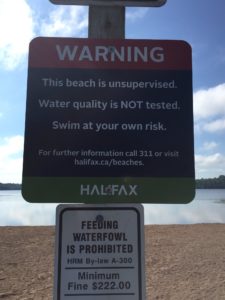 Since that post there was a lot of attention brought to the lake not being tested.

There is another (non HRM) web site reporting that HRM is testing the lake. I tried to contact them a couple of weeks ago, and again last week, and they have not responded. They are reporting incorrect information.

Please do not go in first lake at Kinsmen Beach.

I will provide further updates as they become available.