Glendale Crosswalks at Rankin and Smokey 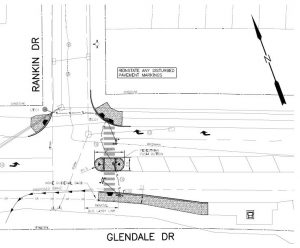 While he was councillor, Steve Craig set out to have marked and lit crosswalks installed at each major intersection along Glendale Ave. A few crosswalks were completed every year, and now most of them have been done. The crosswalks at Rankin Drive and Smokey Drive had been started on paper and made it to being tendered. All that had to be done was for them to be constructed. By all measures, this was a successful initiative.

Through the municipal election we talked about these crosswalks, both within my election team and with many residents around Sackville.

These have been a priority because they impact so many people and they are a safety concern. I am continuing to talk with residents about the crosswalks. I also raised these crosswalks at my first opportunities when I met with HRM staff, and am continuing to work with staff to ensure that they remain as a high priority.

My team and I looked in to the documents and saw that the tenders specified that the concrete work being done by Oct 31, 2019, with the crosswalks being fully functional by the end of March, 2020. The tender documents, which were updated in September and are available here and here, with the NS Government web site here, show what was expected.

The tender was posted to the NS Government web site on Sept 4 with a closing date of Sept 17, and was then awarded on Sept 24. The dates in the documents show that the concrete work should be done by Oct 31 (pages 14 and 36), but also shows a project completion date of March 31, 2020 (page 14). Oct 31 is the date for the concrete work to be complete because of the winter weather and the frozen ground. If the concrete work was started after that time then it would not meet regular standards that are set by HRM. (Concrete work can be done after Oct 31, but it is done on an extraordinary basis.)

I have since been told that there were three issues that caused difficulties in the work being completed on that schedule: 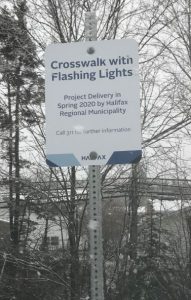 These issues were unforeseen at the time that the tender was awarded, and we didn’t have visibility about them through the election, but they caused the delay in the crosswalks being constructed until it became too late in the year to start the work.

Fortunately, all of these issues have now been resolved.

We do apologize for the delay in getting these crosswalks complete. I pushed for them as soon as I was able, but the time was fast approaching when the construction season would be finished. We will have them constructed as soon as we can.