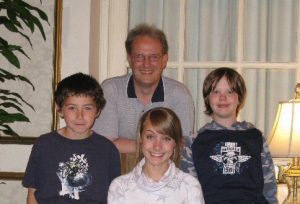 Me and my kids

I have to wish him Happy Birthday here because his mother has done everything she can to block me from seeing my kids (in violation of our divorce order).

In 1987 I got married and after a few years we adopted 3 kids – Laura, Christopher, and William. Things didn’t go well, and we got divorced in late 2008.

I haven’t been able to spend any time with Christopher or William since June 2009, because of my ex. I won’t go in to detail, because every time I talk about it, the wounds are re-opened.

Parental Alienation — where one parent turns the kids against the other parent for no justifiable reason — is what my kids have been subjected to. It has meant that I’ve lost the last 9 Christmases and the last 9 birthdays with each of my sons.

What happened to me shouldn’t have happened. It was in violation of the court order. I was paying spousal support (alimony) and child support for three children, and that took 50% of my take home pay. I had to use the other half to live on. That left no money to pay for a lawyer, and without a lawyer I couldn’t take show a judge what was happening.

Something has to change.

I won’t be able to get back the last 10 years with my kids. Their childhood; their developing years; their triumphs; the hard lessons that they’ve had to learn; their loves; their losses — all are missing from my past.

And for now I’ve got another Christmas where I don’t celebrate it with my sons.

I have to do something to make sure that what happened to me doesn’t happen to others.