Immigration – Issue Of The Month

I support immigration but also want to make sure it is handled carefully because I want to protect Canada, Canadian values, and Canadian citizens. This protection of our country, our values, and our citizens is the single most important job of the federal government.

I support immigration. I support the idea of allowing others to come to Canada.

Since the early 1990’s Canada has received about 250K immigrants per year. With this we have the opportunity to learn about the other cultures and the other backgrounds. We have had the opportunity to grow, both as a country and as individuals, by learning about those other cultures and backgrounds. Although I disagree with Justin Trudeau on many points, I do agree with the idea of “diversity is our strength”. As Canadians we know that our job prospects are more broad if we know both official languages. We develop an understanding of other cultures, and an ability to work with them.

I will protect Canada and Canadian values

The federal government has recently announced that it will be fast tracking some less complex claims. Some friends and I recently had a discussion on Facebook about my concerns with this new process.

In that discussion I talk about the protection of Canada and of Canadian values.

Immigrants are welcome to come in to our country, but have to respect that this is our nation, with our society, and our rules. Canada may not be perfect but if you want to come here, for whatever reason, then you have to accept and adapt to our rules. We should not be bending our rules to suit one group or another. This follows from the old adage: If you don’t stand for something then you will fall for anything. I will make sure that I stand for my country and that Canada, and being Canadian, stands for something. We have an important role to play on the world stage and, as Canadians, we used to have a strong and positive reputation. I don’t want us to lose that.

The new method of working with less complex claims is that if you have certain checkboxes checked then your claim is flagged as less complex and you get to avoid a hearing. If your claim is then determined to be more complex than that simple process is made more strict.

I have a problem with this concept. Nature will find the path of least resistance. It will not find a path of least resistance and then add obstacles back in. A claim that is flagged as less complex will retain that flag and I am concerned that anything that makes it more complex will be overlooked. If something is already simple then there will be a strong predisposition to keep it simple. This will mean that claims, that should have a stronger degree of scrutiny, will be pushed through simply because they were flagged as simple.

This mindset has to change.

We need to exercise a high degree of rigour with immigration claims and then, when certain basic information has been verified, we can determine if the claim can be streamlined.

We will be able to move towards less complex claims, but we will have to justify that first.

One of the benefits of a simple claim is that your claim can be accepted without a hearing. Your documents are checked, but you are never questioned about the validity of them if you have a simple claim. This status should be reserved for those claims that are clearly without any issue and that are guaranteed to not introduce a threat to Canada.

This is not meant to be a scare tactic. It’s meant to be a discussion that protects Canada and makes sure that we don’t allow terrorists to come to Canada.

Following the table on this page we see the criteria that are used to determine if a claim can be accepted without a hearing. Two of the most concerning criteria are:

I was just looking at this again, and it is now clear why the government would want an exemption for those who had been involved in corruption in Libya.

The government has now opened Canada as a haven for those in Libya who are involved in the corruption scandal.

A number of authors have envisioned a utopian world where there are no borders and no wars between countries. Their world sees all of mankind as being at peace, and all cultures blend together, usually under a single world rule.

Unfortunately that is not the world that we live in. In our world there are leaders of nations who have visions of power and domination over other nations. Russia and North Korea are some examples of nations that want to take over other nations. We live in a world where there are significant threats to our safety and our livelihood. Those threats come in the forms of leaders of other nations, of groups interested in disrupting peace and democracy, and in terrorist organizations. These are not idle threats from abroad.

I also recognize that, as a people, we need to grow. Immigration helps with this. We recognize that speaking more than one language is beneficial. We also know that understanding other cultures and histories will help us learn more about ourselves and about the world that we live in. We also benefit from the increased population, increased work force, and increased tax base. As Table A shows, below, if we did not allow as much immigration as we have then we would grow very slowly. 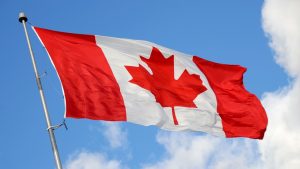 We need to continue to allow immigration, and we need to make sure that we control it at the same time. Our country, our values, our reputation, and especially our fellow Canadian citizens deserve nothing less.

Canada is my home – my country – my citizenship. It is where I have learned my core values. It is where I made my mistakes and learned my life lessons. It is, in my mind and in the minds of many around the world, the best country in the world. I will protect my country, its values, and its people to the best of my abilities.

Note 1: This table shows information up to 2014 because I haven’t found more recent immigration than that.