My Snowplow Ride Around Sackville 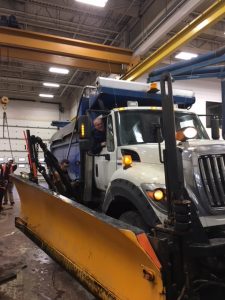 On Sunday, January 5th, I was able to go for a ride in a snow plow. This was a great learning experience. I had heard things about snow plows and the challenges related to snow clearing, and this was a chance to experience it first hand.

Before the snow plow ride I went for a drive with one of the supervisors and we talked a lot about what the job was like.

The operator has to control the truck, the blade, the wing, and the salt, all at the same time. At one point there was one person to drive the truck and a second to keep an eye on, and control, the blade, the wing, and the salt. Those days are in the past. Although the contractor has a high tech training facility with a very good simulator (which I also hope to try at some point), that doesn’t prepare you for plowing in a real life. There are too many things that just can’t be simulated, and the stakes are much higher on a real street than in a video simulation, and so the driver has to keep and eye on everything.

The supervisor and I spent a good hour together, and it was very educational. At the end of it we went back to the shop and I got to see the actual plow. 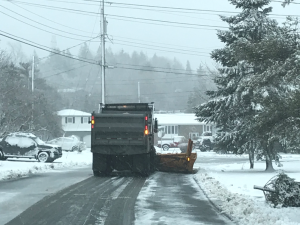 The first thing to recognize is that these trucks are tall, wide, and slow. We have often seen snow plows driving along and they look like they’re going quite fast. On some streets I thought that we were going fast as well, and then I glanced at the speedometer. We were going 25kmh. The expectation didn’t match the reality at all.

Half of the cab is gauges and handles, there is a computer for the salt, there’s some room for the driver, and there isn’t a lot of room for a passenger.

While we were driving along the operator was keeping an eye on the left side of the blade, the right side of it, and the back of the wing (by using a mirror that was mounted on the truck). He was monitoring his speed, his distance away from other things, and trying to get as close to the curb as possible without actually getting to the curb and causing damage. There were a few times when the wing scraped the curb, sometimes hard enough that it seemed to cause damage. The contractor will be back in the spring to fix it. 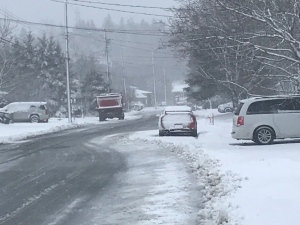 We went along P1 streets. These were wider and often had defined curbs, although there were some where we were able to just push the snow on to the shoulders. These were the highest priority, and were done over and over again. In a number of cases the operator had to leave a wide swath because there were cars parked along the right side of the road. Of everything that we talked about and saw this was the most common frustration.

We went along P2 streets. These were more narrow neighbourhood streets, and the width of them made it difficult even when there were no cars.

Some of the P2 streets were cul-de-sacs, where we switched from plowing on the right side of the road to plowing on the left side of the road. This allowed the snow to be piled in the center of the cul-de-sac where front loaders were often used to clear it. Sometimes the turns were too tight so the operator had to leave a pile of snow beside someone’s driveway, back up and turn, and then continue to plow it. 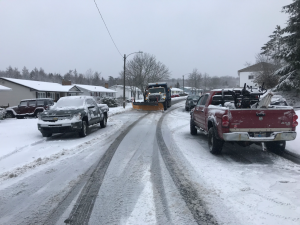 There were times where the operator left some a row of snow across an intersection because it was too tight to make the turn. Every single time this happened we cleaned it up. The job was not just to get to every street, and it wasn’t to impress me, rather it was to make sure that the streets were clear.

The biggest challenge was parked cars. Sometimes, with just one car we were able to stop, lift up the wing, pull in the wing, drive past the car, stop, put out the wing, lower the wing, find the curb, and continue driving. The parked cars caused the work to take much longer and caused the roads to be unplowed. We then got to a street where there were trucks parked across from each other. This was absolutely impassable, and this is where I got the picture. 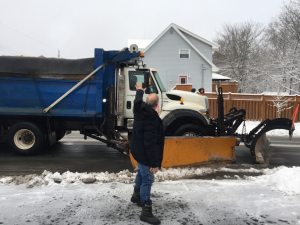 I was with this driver for about an hour, and we got a lot of Lower Sackville covered, although it was mainly P1 streets with only a few P2 streets. He was still working within the service standard that HRM has set. Once the P1 streets were clear enough he would do the P2 streets.

At the end of it he dropped me off at home, quite impressed.

He was careful about his work, not wasting a second or an inch of road, being very careful to stay away from cars and also being careful to avoid any other property damage, and making sure that he got his entire area covered. He left some snow in the intersections while he was turning, but immediately cleaned it up to make sure that the intersection was clear.

He grew up in Sackville. He showed me the house that he grew up in. This is his home. He knows and cares about his community, and he is doing his very best to make sure that our streets are clear.

Thank you. I appreciate it.