Neighbourhood Speeding, and what to do 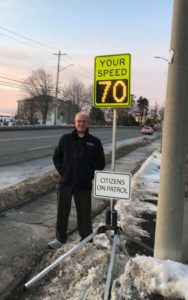 We went through one election in 2019 and another in 2020. In both of these elections the number one issue that you talked about was speeding on neighbourhood streets. This problem has been described as a problem all around Lower Sackville, and also in many areas around HRM.

There are two general ways to slow traffic down. The first is to change the streets to make it more difficult to speed. The second is to encourage and remind drivers to respect the posted speed limit.

We use both methods to help reduce the speeding on our streets.

Making it more difficult to speed

Traffic calming is a term that generally means changing the street so that traffic has to drive more slowly. One common method of traffic calming is having curb bump outs, so that the lanes become more narrow and drivers have to swerve and pay more attention to the road. Another common method is to use speed humps – these are like speed bumps, except that they are more shallow and don’t do as much damage. Firetrucks (with loads of water) and ambulances (with patients who need to be kept as still as possible) don’t like speed bumps, but they are better with speed humps. Because of being more shallow, speed humps don’t provide as much of a deterrent as speed bumps, and so speed is not slowed down as much as it could be. This is an unfortunate, but necessary, tradeoff.

HRM has a policy that determines when a street qualifies for traffic calming. That policy states that a street will be measured for traffic calming and, if it applies, then it will get added to a list to have “traffic calming” applied. These measurements are completely objective, and are designed to eliminate political involvement. The main two factors are the speed of traffic and the volume of traffic.

One reason that I’ve been using the speed radar is to measure both, and so I have a first set of data to request that streets are added to the traffic calming list.

From this total list or 284 streets, the streets within Lower Sackville (District 15), that have been approved for traffic calming, are:

* Walker Road is how it is listed in the traffic calming list, and so I’ve included it here. It is unclear if it is Walker Ave or Walkers Service Road.

In addition to changing the streets, we can change the behaviour of the drivers.

The most common method of doing this is police enforcement of the speed limits. When it is warranted, or when a pattern is identified, the police will perform traffic patrols around town or set up radar locations where they will wait for vehicles.

If you want to request that a street is evaluated for traffic calming then please call me or call HRM Customer Service at 311. 311 will record the information and, if the street has not been measured in a while then it will be added to the list.

If you notice bad driving behaviour (that is not an emergency) then please call the police non-emergency line at 902-490-5020 and report it. Please call them even if the vehicle has already left, so that the incident can be recorded. When the police have enough information to determine a pattern they will provide enforcement.