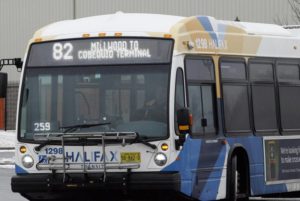 Although both stories are accurate they are also incomplete.

Halifax currently has a full fleet of diesel buses, no electric buses, and no buses of any other fuel sort. We are working on changing that, but it’s a long process.

In early 2018, HRM Council received a feasibility study (written in 2017) on the electrification of the bus fleet. That report can be found by clicking here. The Background section of that report lists actions that have stretched back over a decade.

That 2017 study was referenced in a report that Council received in May 2020 on Strategic Transit Projects. That report can be found by clicking here.

The easiest part of the implementation is buying electric buses. At this point, however, we don’t have the infrastructure to support an electric bus. We would be able to run the bus for a while, but we wouldn’t be able to do anything else with it.

In the 2020/21 budget year, Council allocated money for a staff position to develop a plan for implementation. Part of the responsibilities for this role are to ensure that we have the right infrastructure to support an electric fleet. We are planning to start with the transit garage at Ragged Lake

We have completed a number of steps towards electrification of the fleet, but we still have a long way to go.

One of the considerations was: should the buses be charged while they were in a route, or would they have to be at the garage to be charged?

There are a few different ways for buses to be charged while they are on the road. The most common is overhead wires, but there could also be rails in the road that the buses use, or there could be charging stations at strategic locations, such as bus terminals.

Each of these options presents benefits and limitations. The main benefit is that the batteries in the bus don’t have to have as much capacity. The main limitation is that the bus is restricted to the routes where it can charge.

Because of the limitations, and because of the significant advances in battery technology over the last few years, we don’t have to consider in-route charging. Battery performance has improved enough that a single charge can see a bus through its entire route.

In the mean time we need to ensure that we have enough buses that are operational. Some of our buses are nearing the end of life.

Our oldest buses will cost significantly more to maintain than newer buses, they are significantly less fuel efficient, and they pollute far more. These are all good reasons to move to an electric (or hydrogen) fleet, and we’re doing that, but in the mean time we need to have buses that will run.

The decision that Council made allows for buses to be purchased, but it doesn’t move further than that. We aren’t buying 150 buses today, rather we have given permission for up to 150 buses to be bought over the next three years, if they are required.

The long term plan is for us to have electric buses. Our hope is that we will have completed the work to the Ragged Lake terminal before we need to buy all 150 diesel buses, although we will have to buy some.

We are moving to an electric fleet. It will just take time.